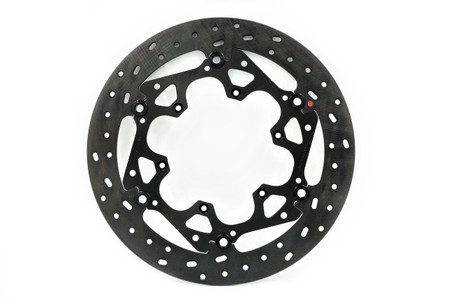 The exclusive BrakeTech AXIS™ series Ductile Iron full-floaters provides a higher coefficient of friction over stainless, with more feel and feedback at the brake lever. The patented AXIS Design floating system is many times stronger than conventional semi-floating brake rotors. The heart of this leading-edge system has the floater buttons controlling radial and axial float only, they are non-load-bearing. All the considerable braking forces are channeled through the trademarked Direct-Link™ architecture, comprising over an 800% increase in surface area load transfer as compared to conventional floating brake rotors…simply far superior by design!

While Ductile Iron provides a higher coefficient of friction over stainless, with more feel and feedback at the brake lever, if you get them wet – they’re going to rust. If you’re a fair-weather rider, then it’s a non-event and not an issue. However, if you ride distances where inclement weather is a definite possibility, you’re better off with a stainless steel rotor material.

There does indeed exist a universal prohibition against the use of sintered metal pads on generic cast iron rotors, we have the same warning. But this caveat is more specifically targeted to old-school gray cast iron and particularly of the individual molding, gravity feed casting type. That combination was and is inherently problematic with a propensity towards suffering from thermal stress induced fracturing. Not good.

The AXIS/Iron on the other hand is a significantly different animal. Firstly, it is CNC machined from American made high grade nodular ductile iron, not gray iron. Secondly, it’s a genuine billet part, sawed from continuous cast bar (which eliminates porosity and the problems associated with that). Thirdly, it is an inherently stronger material with tensile strength more akin to steel than gray iron. Plus, besides traditional heat-treat, we also Cryogenically process them to improve their abrasion resistance and reduce wear. But bear in mind, they are still “softer” than stainless steel, which simply stated means you cannot run any pad you want without the potential for problems developing…

Recommended pad material is Organic/Semi-Metallic, Sintered or Carbon Ceramic. Though along with virtually all sintered metal formulations, they will likely result in a somewhat shortened rotor life compared to the organic/Semi-Metallic alternative.