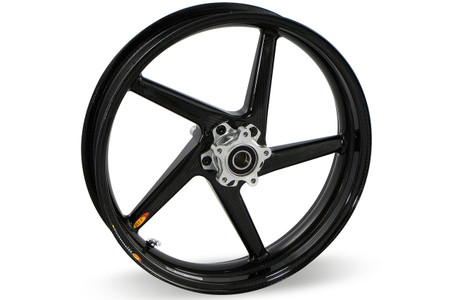 Design: BST wheels are manufactured in a single molding operation. This technique produces a wheel that is far superior in strength and much lighter than any aluminum or magnesium wheel, and one that is light and strong enough for racing and street use. BST wheels are a unique monococque (single unit) design with hollow spokes. The end result is wheels with unsprung weight reduced 40-60 percent compared to stock wheels. This delivers the lowest possible moment of inertia, a critical factor that affects all aspects of motorcycle performance. Maximizing the molecular and structural properties of carbon fiber, BST has reduced spoke and rim weight without compromising their strength. Mass is therefore concentrated in the hub, reducing rotational inertia. This results in quicker acceleration and braking, allowing faster corner entry and exit speeds.