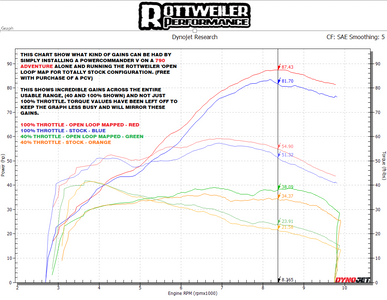 NOTE: The Power Commander sold on this page works exactly the same on both the 790 and 890 Adventure but the packaging and instructions will be labeled 790 Duke. This is because Dynojet has not been keeping up with new models but good news, we have. All 790 and 890 models are identical in all ways in which a Power Commander works and this unit has been used successfully on many 790 and 890 Adventures by both Rottweiler Performance and our customers. Currently we offer many 790 Adventure maps that can be added for free in the options below, and the 890 maps are coming soon. The PCV for the 890 Adventure can currently be used for ignition advances and custom dyno tuning, and we will update our maps soon for a full offering of 890 Adventure configurations as soon as we can. Call for any further details.

Rottweiler Performance has led the way in big KTM tuning and continues to set benchmarks with the 790/890 line of parallel twins. We have run our shop bikes ragged testing over and over what works for these incredible machines and have developed accessory specific maps just for our customers and best of all, they are free when you purchase your Powercommander V from us and always will be for the life of the ownership. The 790 platform is a tricky one being that KTM switched to a Bosch fuel injection system, and through countless hours of testing we have developed maps to both work with and without emissions programming.

What's the difference between STREET and RACE maps?

A STREET map will allow the user to keep their stock narrow band O2 sensors plugged in and does not interfere with emissions based mapping and only has fueling changes in the open loop section of your fuel map where the stock ECU will not try and override the changes. This serves riders wanting to stay in compliance with emissions standards and retain their cruise control while still benefitting from ignition advances throughout and fueling corrections in open loop. STREET maps do not alter the functions of the stock narrow band O2's and the bike will work exactly as intended by the manufacturer with NO engine lights coming on or loss of cruise control.

A RACE map is a race only maps that cover the entire mapping range and will require you to unplug your stock narrow band O2s for them to work properly. This will show an engine light on your dash which is harmless and does not effect the running of the motorcycle in regards to any 'limp' modes that get triggered on other non KTM models. There are separate lights for oil pressure and so on and the engine light is usually only for electrical items left unplugged. A RACE MAP will also disable cruise control until the stock narrow band O2's have been reinstalled and the ECU has been reset.

What we are doing is effectively disabling the ECU's ability to overwrite the fueling changes we have made inside of the closed loop section by unplugging the stock O2s. This can be easily reversed at any time by simply uploading a 'STREET MAP' via the PCV software and plugging the stock narrow band O2's back in. The open loop portion of your map will remain performance tuned and the engine light will go back out over time once the ECU sees that things are back to normal. (See 'Open/Closed Loop' image)

What is the difference between MODERATE and ADVANCED maps?

Moderate ignition advances are just that. They are designed to be a bit of a bump in power without pushing the limits. What we have found is that KTM typically ships some street homologated bikes with very mild ignition curves. We assume that this is because they cannot predict what kind of fuels will be available to the customer in their given part of the world and the engines can easily take some more ignition advance and take advantage of some extra power.

Advanced ignition curves are created using standard U.S. 91 octane rated pump gas fuel, the close equivalent to 95 RON. The ignition advances in these maps have been taken as far as safely possible using sophisticated knock sensing equipment. These maps will usually yield even more hidden horsepower but it is recommended that the user only run a minimum 91 octane fuel (95 RON) or equivalent. These maps DO NOT require race gas. It is recommended to use these maps in conjunction with a Dynojet Map Switch and another map with the same configuration but milder ignition advances so that the user can dial back the advance with the flick of a switch in such a case that lower octane fuel is necessary or ends up in the fuel tank. It should also be known that the 790/890 Adventure models do have knock sensors in the coils, which in the case of accidental lower octane fuel the bike will handily adjust and protect itself.

For more information on how your mapping works on these models, see the videos tab on this page.

Power Commander V (PCV) is by far the most comprehensive way to properly and easily tune the fuel delivery of your fuel injected motorcycle, and it goes well beyond just tuning alone.

When you purchase a Power Commander from Rottweiler performance, we will not only perform the initial set-up FREE of charge if asked, but you will also have access to any maps that we have created for your bike as long as you own your motorcycle!

“But I don't know anything about fuel injection tuning, is this a big learning curve?” Absolutely not. They are completely plug and play, but we can make them even better with some basic information from you with our 'Pre-Setup Program'. A service we provide free of charge! Just call us or leave us notes in your order to call and we will set it all up for you, 'PLUG AND PLAY', with a signed certificate right in the box. Furthermore, with some simple understanding you will quickly find that tuning with a Power Commander is far easier than old school jetting, and takes nothing more than a laptop, tablet or computer that runs Windows and connects with the included USB cable.

A Power Commander operates by adding or subtracting a percentage of fuel from your bike’s OEM fuel maps. If you wanted to add 10% fuel everywhere, you would simply input the number 10 in every cell for each cylinder. If you want 10% less, you would insert -10 in every cell. That's it! PCVs typically come pre-programmed with an optimized map for stock, but if you have some bolt on items and want something more, just select the from the list of modifications and we will install the best map we have for your bike’s configuration.

Aside from fueling control, you will be able to benefit from the extras outlined below: (If you don't want any of these, you don't have to do anything. They are only enabled when you learn how to turn them on.)

In addition to giving you full and simple control over your bikes fueling, the PCV is also the key to the following accessories:

Dynojet Map Switch: A simple handlebar mounted switch that will allow a Power Commander to have two different maps loaded into it and allow you to toggle between them on-the-fly, while you ride! When used with an Auto Tune unit, it will turn Auto Tune on and off. (see HERE for more info)

Dynojet Auto Tune: Auto Tune adds the ability for you bike to “tune itself” while you ride! It’s basically like installing your own personal rolling dyno that is always searching for the perfect AFR (air-fuel-ratio). If this option is chosen, you will need to choose whether you are running an 'Open Loop' map only or have opted to unplug the stock O2s for full mapping. If you leave the stock O2s plugged in, and run Auto Tune for full mapping the two computers will just fight each other like a boxing match. The stock ECU, will constantly lean out, while Auto Tune will constantly try and richen the fuel mixture. (see HERE for more info on Auto Tune) This option requires modification of your header system in order to accept Auto Tune's 18mm Wide Band O2.

POD-300: When added, it can display any of the channels that are being tracked such as RPM, throttle position, injector duty, percentage of fuel alterations, ignition advance, air fuel ratios (requires Auto Tune) and more. The POD-300 will also allow changes to mapping in 1/3 adjustments. For example, if your rev limit is 10,000 RPM, you can adjust the fuel (+/-) in any percentage from 0-3300, 3300-6600, and 6600 to 10,000. The POD-300 also supports data logging as many channels as you choose and will then export to Excel for further inspection. (see HERE for more info)

The list goes on but don't be intimidated, this is a plug and play item that can be upgraded later as desired or as you learn more about the functions. Don't want to? Don't worry, this is as easy or as in depth as you want to make it. Think of a Power Commander like a Swiss Army Knife. You can use just the one tool, or you can use them all.